Introduction to the Lapidary Arts

Nova Labs Celebrates Women Who Make With May Events and Classes 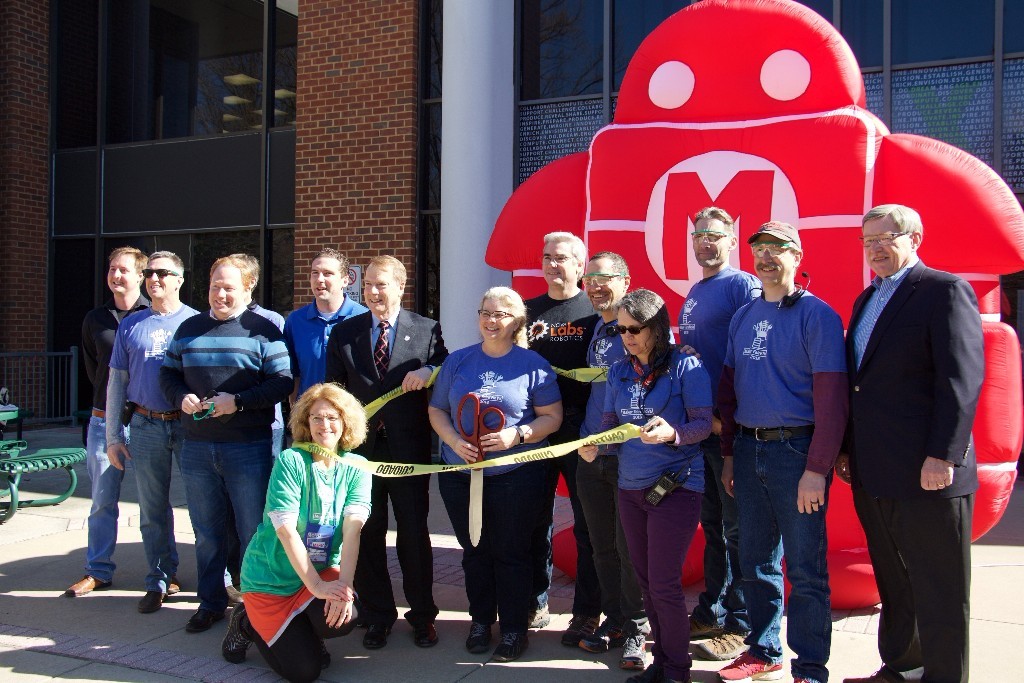 MESSAGE FROM THE PRESIDENT

Maker Faire Nova 2018 goes to college! We have much to celebrate as Nova Labs hosted the 5th Annual Maker Faire in partnership with George Mason University.  This is a tribute to the vision and dedication of the Maker Faire committee led by co-producers Jeanne Loveland and Carl Hutzler.   Special thanks to the Maker Faire NoVa team.  Read more about highlights, including the return of Theo Nazz!

We have great news to pass on from the Maker Faire team alumni. Amy Shaw, co-lead of the 2017 Maker Faire NoVa, continues to make an amazing impact in our community. Amy, along with her colleagues at the South Lakes High School PTSA Food Pantry, will receive the distinguished Vade Bolton-Ann Rodriguez Legacy Award at the 2018 Best of Reston Awards for Community Service. This award has only been given four times since its inception. I recently ran into Amy around town and asked her if she was out on behalf of the pantry — which indeed she was. Generosity of time and talent is the hallmark of the Nova Labs community.

For the month of March, the Board of Directors welcomes three new Key Members. A warm welcome to Elliot Roth, Alina Koos, and a welcome back to Charles Galpin!

The board also discussed several of the large capital expenditure requests on the table. We referred some back to their originators to gather more information. However, the metal shop will be pleased to hear that the board approved two requests – a vertical metal bandsaw and a horizontal metal bandsaw. These high-end saws will add new dimension to the metal shop.

If you are interested in making a pitch for a new tool at Nova Labs, please work with the steward to fill out a large capital expenditure request. The next cycle starts April 1 and all submissions are due by June 30th.

The board’s membership experience working group is developing a new member survey which will launch in April. In addition, the Tech Committee is close to selecting our enterprise-level Internet provider as well as completing the requirement for the AV buildout for Classrooms A and B – this AV upgrade will significantly improve our overall capability and audio-visual fidelity. All knobs are required to go to 11.

The board is also working with the Safety Committee to update and revise our safety policy. Keep an eye out for specific updates.

Nova Labs is a finalist for the 2018 Greater Washington Area Innovation Awards, Community Impact Innovator of the Year.  Winners will be announced at an event at the Hamilton Live in Washington DC on April 4. Thank you to Paul Chase, Brian Jacoby and Margaret Kositch for representing Nova Labs as part of this event.

Marybeth Haneline will be honored at the 2018 Best of Reston Awards for Community Service, co-hosted by the Reston Chamber of Commerce and Cornerstones. The honorees will be celebrated at an event on Thursday, April 12 at the Hyatt Regency Reston.

What a great day for Maker Faire NoVa 2018!  In spite of questionable weather in the days preceding and an actual snowstorm afterwards, the new partnership with George Mason University to host Maker Faire NoVa 2018 was a resounding success. More makers participated, more attendees came, including GMU students, staff and faculty, and everyone saw and engaged with interactive exhibits to their great delight. Everyone enjoyed Makey who made his first appearance at the Faire. There was a definite maker energy in the air.

With three buildings and several outdoor locations, there was room for makers to show their stuff and for the larger attendance crowd to spread out and explore. There were about 140 maker exhibits, 10 speakers, and 11 Maker Ed speakers. Some of our favorite exhibits included NASA, Cutaway Creations, Fairfax County CERT, Lofaro Labs, Dogwood Think-A-Bit Lab, and of course, the blacksmiths including our featured blacksmith Theo Nazz and the Nova Labs blacksmithing group. There were actually too many to list, the entire list can be found here.

Thanks to our sponsors who helped make this event possible. A special thanks goes out to George Mason University for being our Event sponsor and working with us to bring the Faire to new audiences. And many thanks to the 241 volunteers who helped with so many aspects of the Faire.  Nova Labs is especially grateful to the dozens of volunteers who faithfully return year after year.

And special thanks to the Maker Faire NoVa team, led by co-producers Carl Hutzler and Jeanne Loveland, for all their efforts and providing such an awesome showcase for Nova Labs. The Faire leads include: Brian Jacoby, Sara Bradley, Asma Chaudhary, Tae Edell, Jade Garrett, Nick Grzeda, Paul Hancher, Becky Howick (GMU), Lauren Hubbard, Jeanne Marshall, Shane Smith, Todd Snedden, and Taylor Sweeney. We have expanded our reach into new areas and look forward to future ventures. As the Faire grows, more team members are needed, so let us know if you’d like to help. 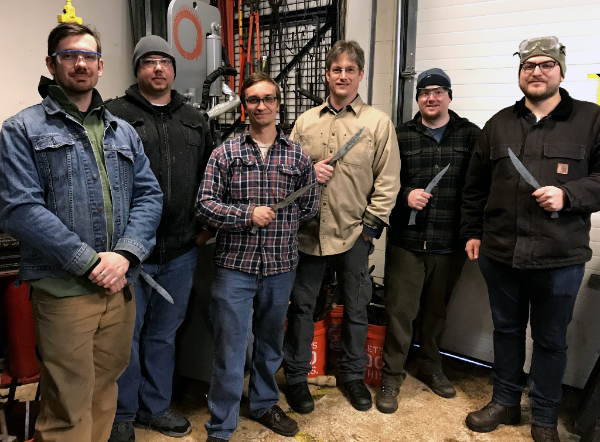 Knife makers and fans of the History Channel’s Forged in Fire show got to see Theo Nazz, Champion of Champions, make a blade from start to finish this year at the Maker Faire NoVa.  Theo followed that up the next day with a master class at the Nova Labs makerspace on how to make a knife with an integral bolster or guard.
Forging alongside Theo was a Forged in Fire contestant named Josh Fikentscher who gave a demonstration of how to melt down iron with carbon to make steel.  Fikentscher showed us how to make “bloom steel,” which is similar to the ancient steel from Damascus that shows crystalline patterns throughout the metal.  His methods are modern, but the steel has the same qualities as the original.  Josh will come to Nova Labs later this year to demonstrate this technique again.

Theo’s knife making class was the first in a series of bladesmithing and blacksmithing master classes at NOVA Labs.  We are working to bring more smiths from Forged in Fire, as well as some of the top smiths from the East Coast and beyond, to teach in Blacksmith’s Alley, behind the makerspace.

Come join the Twisted Metal Blacksmiths for these classes, or forge with us every Saturday or Sunday.  We have fun with our metal, combining modern tools with traditional skills to make everything from steel jewelry to furniture, battle axes and swords.  We are not your grandfather’s blacksmiths.  Check it out for yourself at Nova Labs of Reston. 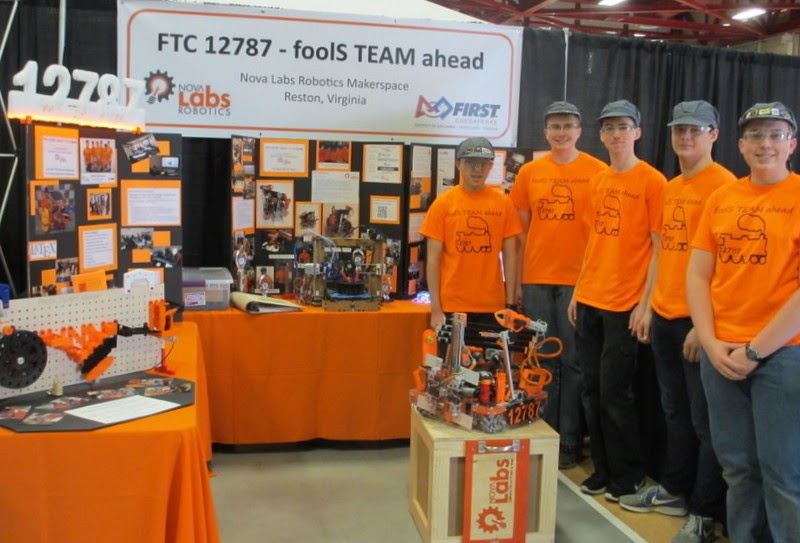 Nova Labs Robotics FTC Team #12787, foolS TEAM ahead, participated in the FIRST Super Regional East competition March 16-18 in Scranton, PA.  The event included the top 72 FTC teams from Maine to Virginia advancing from state championships.  The team proudly displayed Nova Labs orange in its booth and on the field.  The makerspace elements of the robot captured a lot of attention from judges and other teams.  Our robot showcased Nova Labs CAD, Laser cutter, Woodshop, Metalshop, 3D Print, CNC, vinyl cutter and heat press for our shirts. We had lots of discussions with other teams on makerspace connections in their communities.  People were impressed with the capabilities of Nova Labs.

The robot performed well – nearly flawless on autonomous on all matches and scored well in operator mode. The makerspace fabricated parts held up through tough competition matches.  When all the points were tallied, we did not make the cut to advance.  But we had a great time trying and learned a lot.

We debuted an new XL version of the 3D Print Group marble machine at the booth.  It attracted ‘kids’ of all ages the entire three days. Many thanks to all of the Nova Labs makers who helped us and the other Nova Labs Robotics teams this season.  It’s awesome that members support youth in this important STEM activity.

>Provided by Eric and David Link 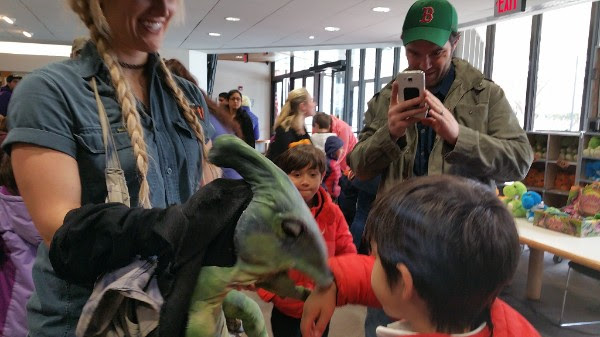 It may have been 65 million years since dinosaurs roamed Reston but thanks to Erth’s Dinosaur Zoo Live, they roamed the CenterStage for a delightful hour.  Erth’s Dinosaur Zoo Live Delivers laughs, science and most importantly, big dinosaurs, to small audiences. In the show audience members met baby hadrosaurs, giant dragonflies, Tyrannosaurus and Titanosaur. How did they see such ancient long-dead beasts? Through the magic of puppetry!

These giants of the past were brought alive by talented puppeteers. These aren’t your everyday puppets either. These beasts sport intricate mechanical manipulations, even full body puppets with integrated cameras. It doesn’t take long before you forget they are simply puppets and fall headlong into a journey into the past – adults and kids alike.  “The giant puppet looked realistic!” my science-loving son said about the show. Eight-year olds are notoriously hard to impress, and this one certainly was.
Creative theater like Dinosaur Zoo Live makes the CenterStage and the Reston Community Center such an asset to the community.   You can check out future programs and give your support by visiting their schedule at
http://www.restoncommunitycenter.com/attend-shows-events-exhibits/centerstage-schedule.

April 8, 2 – 4PM, Introduction to Welded Sculptures and Found Art Projects
Learn the basic skills needed to make welded sculptures and found object artwork. Each student will make their own sculpture based off a frog design.

April 12, 7 – 9:15PM, THREE WAYS to INLAY – Designing Wood Inlays for Box Covers & Beyond
Attendees will learn THREE ways to quickly add Inlays to their wood projects such as box covers. Techniques will use the laser cutter, heat gun and demonstrate which adhesives should be used.

Looking for new work opportunities?  Check out the #job-postings channel on our Slack workspace.